It all started with the few fairy statues in the garden... Richard Weidenhaupt-Pelzer put these statues on the wall, lined them up, and let his grandson, Havertz, beat them down with a football.

"At the time, Haverts was about the same height as the statues," the former Leverkusen midfielder Renhofer recalled with a smile, "but he knocked them all down."

Renhofer knew the Haverts family well, they all came from Mariadorf, a place in the west of Aachen, Germany.

Renhofer played for a local club called SV Alemannia 1916 when he was young. The chairman of this club was Haverts' grandfather.

"The grandfather of Haverts is the soul of our club," Renhofer said. "When he discovered Haverts' talent, doing his best to cultivate Haverts became his top priority."

At the age of four, Havertz joined the U6 echelon of the club under his grandfather. According to the memories of his first coach, Haverts was only as tall as a fire extinguisher box at the time, but his thin body had outstanding flexibility, which surprised the coaching staff.

At first the coaching staff only intended to let him play occasionally, but later they found that Havertz was so good that the echelon did not dare to take him out of the starting list easily. At that time, Haverts had an excellent left foot and a good header ability.

Haverts just became stronger and stronger, the locals knew they had a football genius here.

Scouts from Bundesliga clubs such as Borussia, Cologne, Leverkusen, etc. began to frequently contact Haverts' grandfather and parents, and promised them that they would create a bright future for Haverts. But Havertz, who was only ten years old at the time, eventually joined the Aachen Club (at the time in Bundesliga) and only joined Leverkusen a year later. 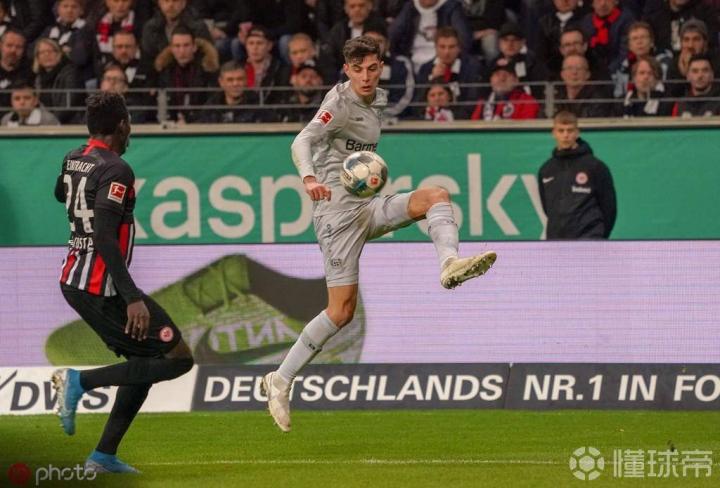 "If you want to learn more about Havertz, then you need to know about his family," said Anfang, the former youth coach of Leverkusen.

"His father is a policeman and his mother is a lawyer. They are both cool-headed, sincere and honest people. They also educate Haverts in this way. So Haverts is very humble and makes people happy to work with him. You can talk to him about anything. ."

After overcoming some physical growth problems, Havertz began to make rapid and steady progress. He joined Leverkusen's U17 echelon at the age of 15.

Anfang said: "My first impression of Haverts is that he is very talented, tall, gentle, and calm on the court. He didn't fully display his abilities at the time, so we need to develop him slowly. ".

An Fang explained: "Havertz always wants to play the game well from the beginning. If he makes a mistake at the beginning, he will lose confidence.

He devotes himself to football and has high demands on himself. If he does not meet his expectations, he will be very disappointed. We need to help him overcome these mentality problems and make him realize that his opening performance is not important. He needs to learn to stop worrying and truly enjoy the game. After all, football should be happy, especially for a gifted child like him. "

It's just that opponents don't like him working so hard, because it will make them very frustrated. An Fang said: In one game, a player from the other side wanted to anger Haverts. I called Haverts to the sidelines and told him not to worry, one day that person will cheer for you, maybe just today.

In early 2015, Haverts found his rhythm. At the age of 16, he was fully capable of playing U19, but the coach believes that staying in a lower echelon is more conducive to his growth.

Anfang said: "We feel that being the best player on the team is more conducive to his development than being one of the best players on the team. He needs to be a role model, a team leader. This has proved to be useful. He no longer Just focus on his own performance and start to learn to take responsibility for the entire team. He will play better and better and score more goals." 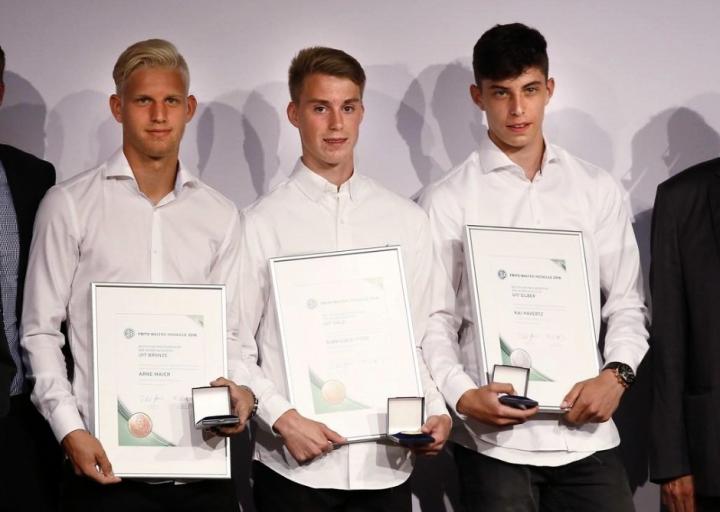 In the 15/16 season, Havertz led Leverkusen U17 to win the German U17 League Championship, scoring 18 goals.

An Fang said: "He is the kind of person who can lead the team without shouting. He will convince his teammates with his performance. Havertz has a girlfriend and also plays video games, but he will also devote himself to football. And the game."

The German Football Association is also paying attention to Haverts. The German youth team coach Schweitz recalled Havertz’s performance in a 60-80-man training team in 2014, saying: “Havertz is very capable, but at the time he always wanted to solve problems from a purely technical perspective.

In a training match, I told him: I know you are very particular about playing football, but you have to learn to use your body. He nodded to me and immediately completed two interceptions in the game. I thought this kid was very special. "

Schonweitz knew that the easy-going and humble Haverts also had hidden ambitions. He said: “Havertz’s ability and willpower are both outstanding. The combination of these two is very helpful to him. As a midfielder, Haverts also has a huge The advantage: time.

In this regard, he is a leader among his peers and set an example for latecomers. Due to his technical and visual advantages, he has more time to judge and respond to the situation on the court.

Although he is outstanding in height, he moves quickly, handles the ball cleanly, and is always one step faster. He is also a tough player now, and he is a perfect player. "

Leading Leverkusen to win the U17 made Haverts a lot of maturity, and then he helped the German U17 to reach the U17 European Cup semi-finals. 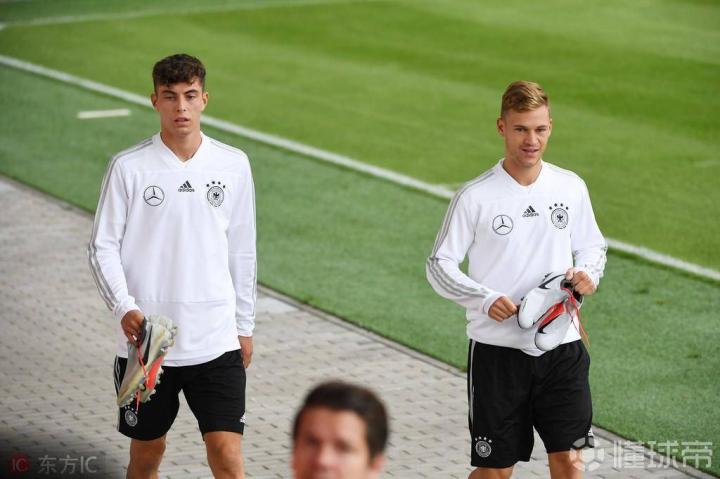 A few months later, he naturally joined the Leverkusen first team. Former Leverkusen head coach Schmidt recalled: "Although Havertz had only joined the first team at the time, his performance on the court looked like he had been in the team for several years."

Soon, Havertz became the main team of the team and participated in the Champions League with the team, but because of the German college entrance examination, he missed the second round of the round of 16 with Atletico Madrid.

Schmidt said: "Young technical players sometimes get lost for a while after they are promoted to the first team, but Havertz has always had a clear goal and his teammates respect him."

In this way, Havertz became a member of the German national team and also became a hot star in Europe. The data company Impect founded by former Leverkusen midfielder Stefan Reinartz ranks players 21 and under. Havertz ranks third, behind Harland and Sancho.

The picture above is a statistical chart of Havertz's league performance this season. If it reaches 100, it means that the performance surpasses all other Bundesliga players in the same position, 50 means the average level, and a small football represents a goal. It can be seen that Haverts' performance declined in the first half of the league, but he returned to the top after Christmas.

Reinartz said: "Early this season, Havertz was in the worst form since joining the first team. He could only score 58 points among players in the same position. There were many reasons for the decline, but his later performance proved that the decline was only temporary. . Scored 9 goals in 12 games and contributed 4 assists. Such statistics show that he is still the best young player in this position."

"Havertz's style of playing reminds me of the current Arsenal No. 10 player," Reinartz said, "but there are also differences."

As shown in the picture below (blue represents Haverts, red represents Arsenal's No. 10 player). 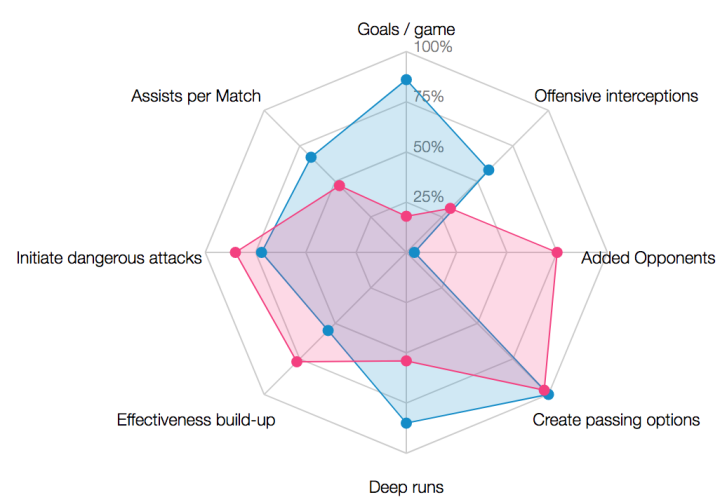 "Both are excellent in terms of creating pass options (indicating the ability to advance the ball). By receiving passes, Haverts can bypass the defense of 85 people per game on average, which is the best in the Bundesliga. Muller ahead of Bayern."

Haverts is not as good as Arsenal No. 10 in attracting defenses with the ball (added opponents), but he appears in dangerous positions more often (deep runs).

Where will Haverts go next? He was going to leave the team last season, but Leverkusen's asking price of 120 million euros dispelled other clubs.

This is still the case today: Havertz intends to go to a better club for further development, and Leverkusen must sell it for a good price.

The club still bid Haverts more than 100 million euros, but they know that with two years left in Haverts's contract, he may not be worth the price next year. Those big clubs may take him away with 60 million euros.

The question now is whether Leverkusen is willing to drop a little bit (such as 80 million euros) to send Haverts out this summer. They need to consider both from a competitive and financial perspective.

After all, without Haverts, Leverkusen is likely to have no Champions League seat next season, which means a loss of at least 30 million euros. So maybe it is the best choice to keep Haverts for another year, even if the transfer fee may be lower then.

In the past year or so, the Havertz team has received inquiries from almost all European giants. So the rumors that the fans heard about Haverts and Bayern, Real Madrid, Barcelona, ​​Liverpool, Manchester United or Chelsea are all based.

The player's team has had many contacts with these club sports directors or scouts, and some clubs like Bayern even made tactical plans based on the players a year ago. However, Leverkusen has not yet conducted substantive negotiations with these clubs.

In the past few weeks of the Bundesliga rematch, news about Haverts' transfer has increased again. For example, there are reports that Chelsea have shown great interest in Haverts again.

However, considering that Chelsea is not very short of people, coupled with Leverkusen's insistence on the offer, the possibility of Haverts joining Chelsea should be very small. Chelsea insiders also revealed that Chelsea, Leverkusen and Havertz are still far behind in reaching a transfer agreement.

Bayern is not much better. They are currently focusing on signing Sane from Manchester City, so it is unlikely to spend another 150 million euros (transfer fee plus salary) to win Haverts, and signing a good right-back is also their top priority.

The transfer rumors about Haverts will last until at least August, because Leverkusen will play in the Europa League.

At that time, Haverts’ attention may be even higher, and the economic pressure on European giants clubs caused by the epidemic will also be somewhat eased. What is certain is that in the face of such a talented young star, any club that really wants to sign Haverts will not hesitate for too long because of cost issues.

In the above video highlights, the commentary after each goal gave compliments and comments. Everyone can listen and try to find out which goal the following three evaluations are from (the goal numbers in the video are 1-7)

2.Oh my word, Kai Havertz slips into that position.